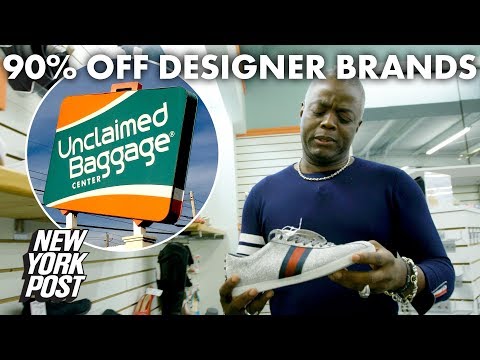 If your lost luggage goes unclaimed, there’s a very good chance somebody else is walking around wearing your Prada sunglasses.

The New York Post has released a video report that is equal parts whimsical and disturbing. Apparently, if your luggage is lost and goes unclaimed for 90 days, airlines are selling those bags to a discount store in Scottsboro, Alabama.

The store, called the Unclaimed Baggage Center, is a one-of-a-kind thrift store that only sells merchandise from suitcases and carry-ons it purchases from the airlines when lost luggage isn’t reunited with its rightful owner.

And we’re not talking a few pairs of underwear here.

The video focuses on one couple who have turned shopping at Unclaimed Baggage Center into an obsession, spending $20,000 to $25,000 over the last five years on such items as a 40-carat emerald, Dolce & Gabbana sneakers, a Versace suit, an $8,000 Brioni cashmere coat that sold for just $800, and, yes, Prada sunglasses.

Check out the video. You’ll never want to pack anything of significance ever again.